After installing Mozilla Thunderbird yesterday, all I can say is “wow!”  Not only is the look ultra-slick and refreshing, but it’s so fast that it really does deserve to be alongside an amazing browser like Firefox.  They’ve done such a great job that people nearby just start using it without even saying anything.

Before Thunderbird I wasn’t willing to push the Mozilla mail client on anyone.  I was using it before and, while it was fast, it looked like a relic of the Netscape 4.0 days.  As well, you needed to match it with the Mozilla browser.  Also fast, but not an end-user polished package.

Thanks to mscott and the rest of the Thunderbird team, however, it has been transformed into a modern, polished mail client.  It even fits seamlessly into XP, something I find that Office 2003 doesn’t do well.

The build I’m using at work is their latest “weekly build”.  So far it’s been smooth sailing.  Alongside Firefox (with its Google bar, ad-blocking and tabbed browsing), I’ve got a couple of amazing productivity tools that Outlook could never beat.

rml posted some use cases for Project Utopia.  If they can solve these issues smoothly (which I’m pretty sure they’ll pull off), Linux will take a big jump in terms of general plug’n’play usability.

Unfortunately, the use cases miss out on one of my favorite new features - multi-session X.  You can easily start two X servers on two different virtual consoles right now, but the new gdm stuff will support suspending and resuming X sessions, as well as nested X servers.  This will help Linux catch up to the cool multi-user login features of Windows XP.

It’s tricky to get this working well in Linux right now - there’s a bunch of magic that goes on behind the scenes to make sure the console user gets the proper permissions.  This stuff needs to get upgraded to handle this multi-session magic.

I’ve got a solution where I’ve added all of my potential console users to a “console” group and assigned root.console to each of the devices that console users might need (ie: /dev/nvidiactl, /dev/dsp).  This works for now, but I’d like to see this handled via ACLs or some other fancy way.

Vivendi Universal is releasing, for free (gratis), two of my favorite games ever: Tribes 1 & 2.  This release is geared at getting games’ juices fired up in anticipation of Tribes 3.

I’m glad to see that people realize that freeing abandonware can be useful.

Wow.  You can run this script to automatically install IE6 in Linux.

It took me a while to figure something out that works, but I’ve figured out a way to organize my filters in Thunderbird.  Since I have something like 40 rules, editing and understanding them was started to become difficult.

My solution?  I started adding fake filters as separator lines between the groups of filters.  They now look like this:

I would love to have filter folders or some other form of hierarchical organization, but this will do for now. It’s much easier to understand your filters when you can see them executing as a block of similar filter types. I prefer my people filters to execute first, followed by mailing lists and opt-in notifications (bank, Yahoo, Google, etc.) and, finally, my SpamAssassin-tagged-message rule filters.

Okay, I’ll admit it.  My mind is racing with extension ideas right now.  May as well dump one here for future reference.

So, here’s my cool extension idea: take all of the bookmarks in the browser and sync them with a central server via a webservice.  Allow deep custom categorization of bookmarks and keep the folder structure on the server.  For extra credit, archive a current copy of the page for future reference if the page goes away.  If you have extra time, write an IE plugin (or external program) that does the same thing.

Now, where to host such a webservice?

I found a particularily amusing comment in my earlier Thunderbird article:

You seem to know the Thunderbird developers by name, which makes your post quite biased, but comparing Outlook to Thunderbird is like comparing USA to Afghanistan in military power. At least be reasonable and compare it with Outlook Express. The bias you guys are expressing makes mozilla look like a toy without much substance.

You got to shows some honesty somewhere if you want to build real relationships with customers and users. Outlook is a platform, there are tons of useful programs that extend Outlook in anyway they want. Thunderbird is more like a simple program and has its own competitors in the shareware business. There are many shareware programs which is faster and better than Thunderbird, yet you pick Outlook as competitor. Most probably you want to gain sympathy, but believe me every company that does that goes out of business sooner or later. You got to innovate, instead of cry.

Unfortunately, Outlook Express isn’t a fair comparison.  It would easily take a beating when stacked up to Thunderbird’s features, stability, UI and speed.  I might be deluged with comments saying “try Outlook instead!”

I’m sorry to say that no, I haven’t had any experience with any of the Windows shareware mail programs out there.  There was a period of about a week that I used The Bat! in the 90’s, but I was using Outlook at the time and it didn’t fit the bill.  Other than that, nothing.  I use Evolution on my Linux box at home, though I’m considering a switch to Thunderbird there as well (if only for Evolution’s VFolders in Thunderbird!)

I stand by my previous glowing review of Thunderbird.  It’s small, fast and looks like a modern email client should.  It’s also dog-easy to extend via XUL and Javascript- something that Outlook Express sorely lacks (there you go - I compared with OE).  If I somehow find myself lacking a certain feature in the future, I might just try my hand at extending it.

BTW, the Macro Editor and XULMaker extensions might be an interesting thing to try.  Perhaps another day.

Are you a .NET coder?  Using continuous integration, or want to?  If so, check out Draco.NET.

Draco.NET now has a client-side GUI.  It can monitor your check-in builds and trigger a forced or normal build.  It sits in your system tray and hides itself when not needed.

You’ll need to build Draco from CVS to get this particular feature.  With any luck, there will be a 1.5 release soon and 1.6 betas soon after! 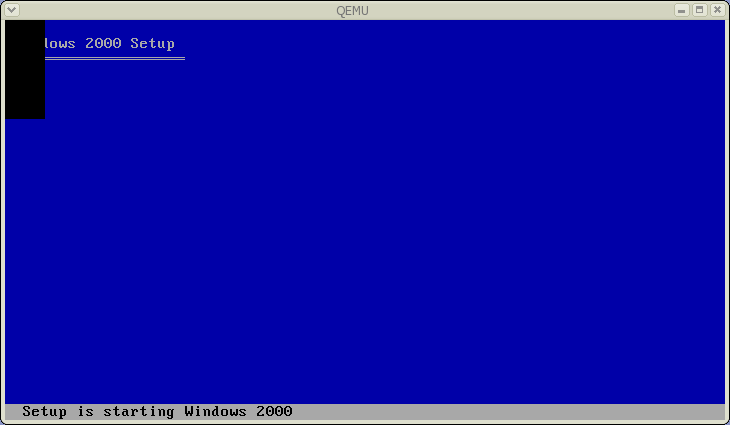 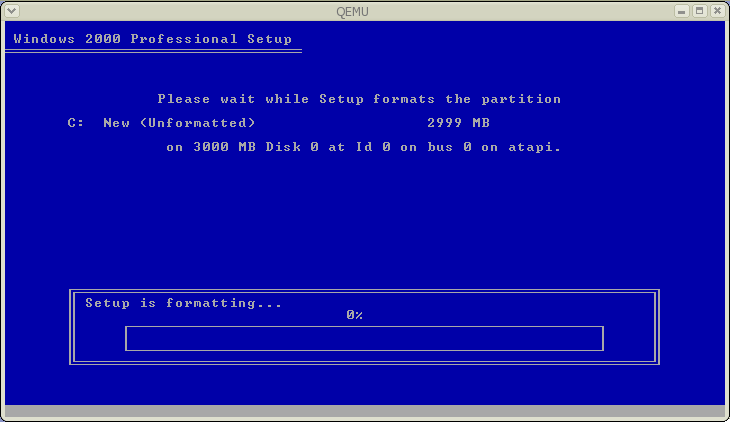 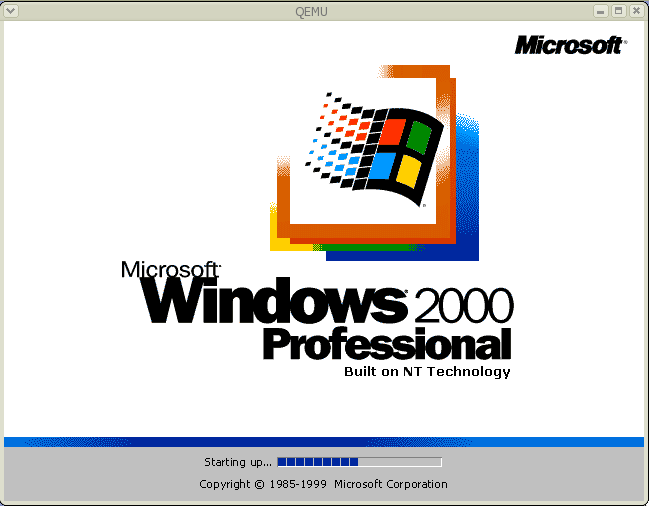 I think the screenshot window clipped the first shot by accident as it was coming up.  Oh well.  Still very, very cool.

Seems to take a while to enumerate devices after install (still happening right now).  I’ll post more shots later if it works.

With the latest release of QEMU (0.5.4), it now boots Win2k perfectly.  I’ve fixed a small bug in the code preventing the Bochs VBE display driver from working and the full-color support looks awesome.  All but the first screenshot are running 1024x768x16bpp visuals.

Note that XP should boot full-color fine without the patch since, AFAIK, it has full VESA 2.0 support built-in.  You should be able to get 8-32 bpp visuals from the default Standard VGA driver. 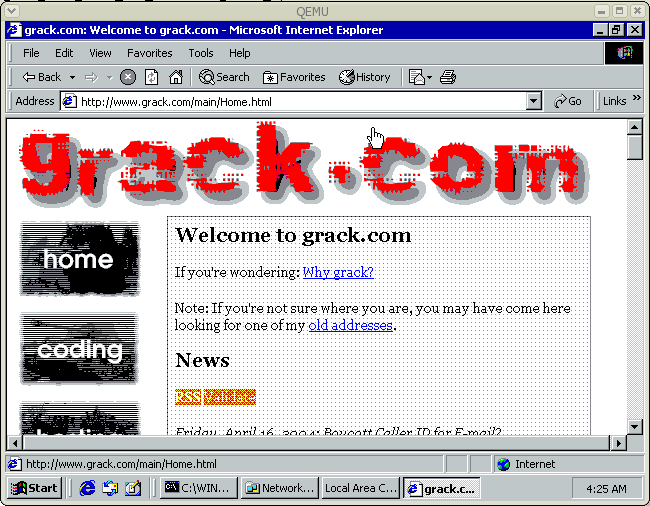 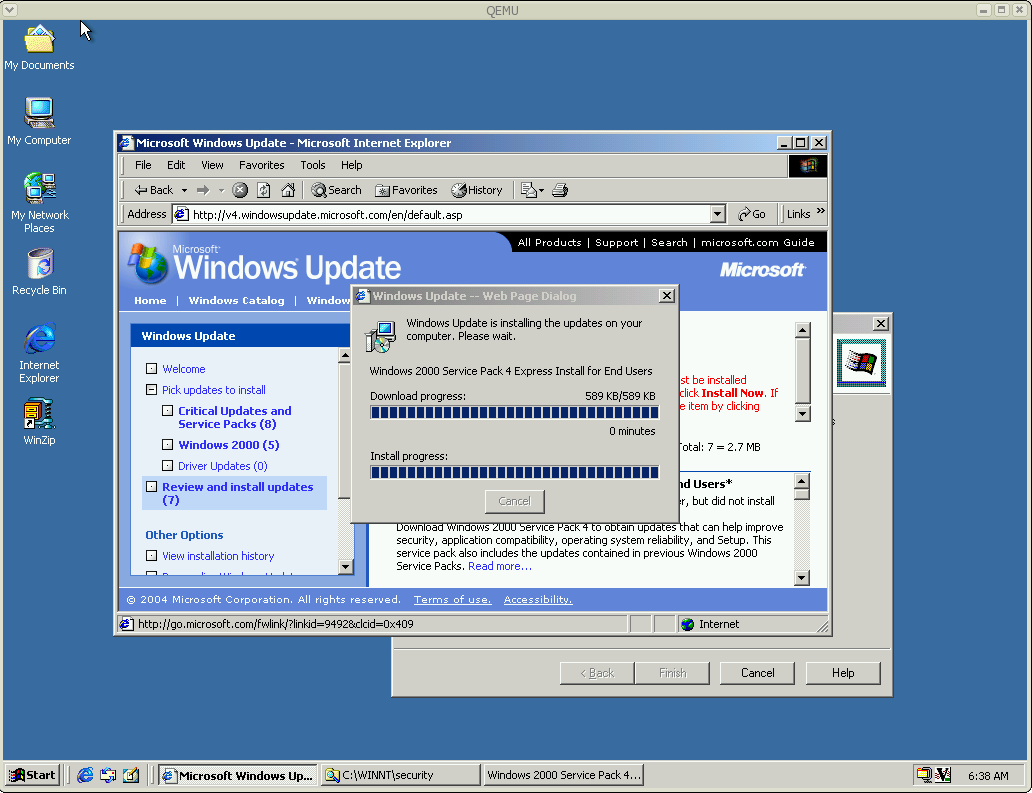 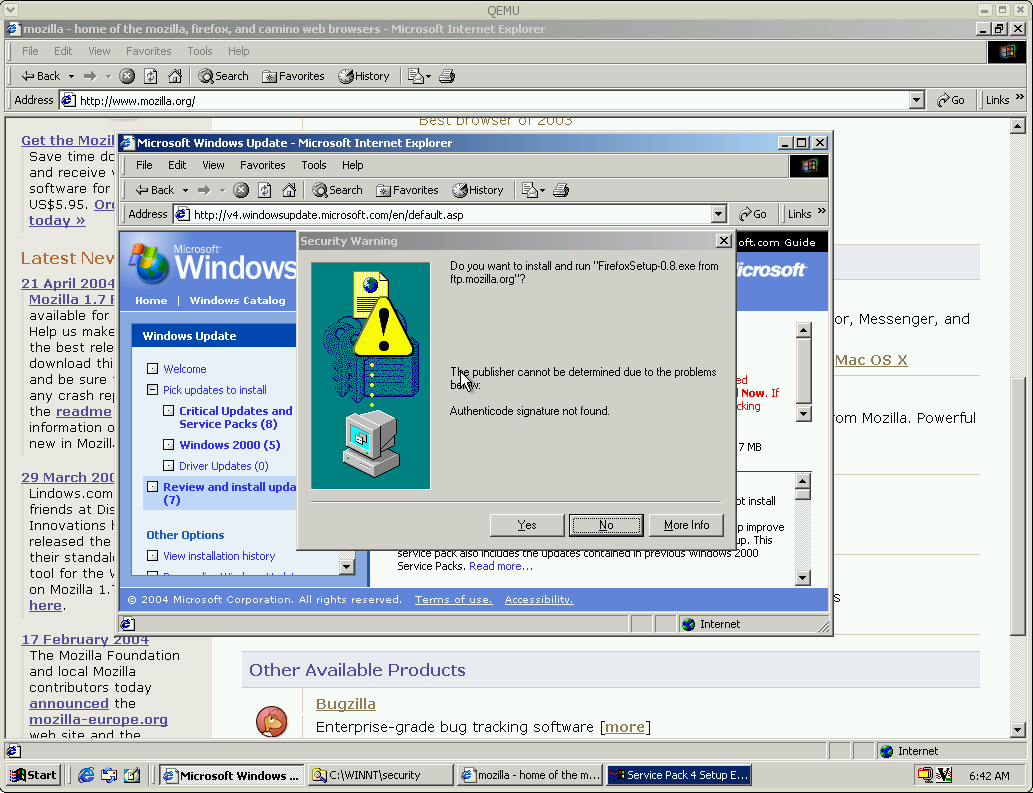 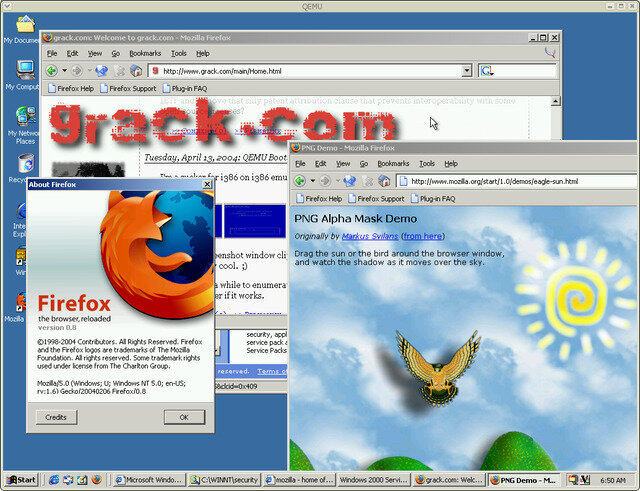 VMWare has a new contender.