After receiving my Google Voice invite tonight and picking a phone number, seemingly at random, I discovered that I had picked a number with the same last four digits as one of my friends’ numbers.  If you are familiar with the Birthday Paradox, you might recognize the form of the problem.

It turns out that you can expand this sequence out and wrap it up in a nice factorial equation. I won’t bore you with the details- it’s idential to the technique used on the wikipedia entry. You’ll end up with the following equation:

While having the equation on hand is nice, computing BigInt-magnitude factorials is outside Google’s math evaluation query and Apple’s Calculator application. Fortunately, Wolfram Alpha comes to the rescue (the first time I’ve been able to use it for a real question!): 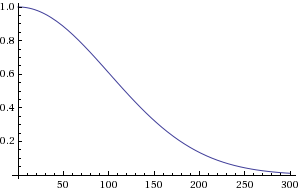 So, as you can see, if you’ve got 120 friends, your chances are pretty much 50/50 that you’ll have the same last four digits as one of them.