IE6 has been getting a bad rap lately. France and Germany are both warning their citizens not to use it. The recent intrusions at Google were purported to be caused by holes in IE6. Even Microsoft is warning users to steer clear of it.

To get an idea of who’s given up on testing against this ancient browser, I’ve been running around browsing with IE6 in a VM. From what I’ve seen so far, it’s not getting a lot of love.

I’m pretty happy about this: as more and more sites break in IE6, it drives more people to browsers that don’t suck like Chrome or Firefox. It’s the last part of the browser death spiral: completely busted on the new and exciting sites.

The web browsing experience is pretty poor overall. Many sites serve transparent PNG files to the browser, which often render with miscolored backgrounds. Elements gain random padding, throwing nicely formatted designs for a loop. Other elements that are shrink-wrapped in other browsers sometimes end up with extremely large widths.

Note: I tried not to test sites too deeply- I figured that deeply nested screens will occasionally break in modern browsers too.

Facebook is the first site I visited. I figured that this would be the site most likely to regularly test against IE6. It’s clear that they do some testing: the interface works reasonably well overall, with only a few small glitches that might annoy a user.

The most glaring issue happens when you click the “more” link on the left. The UI gets kicked down to the bottom of the screen. Looks like a classic IE float bug: 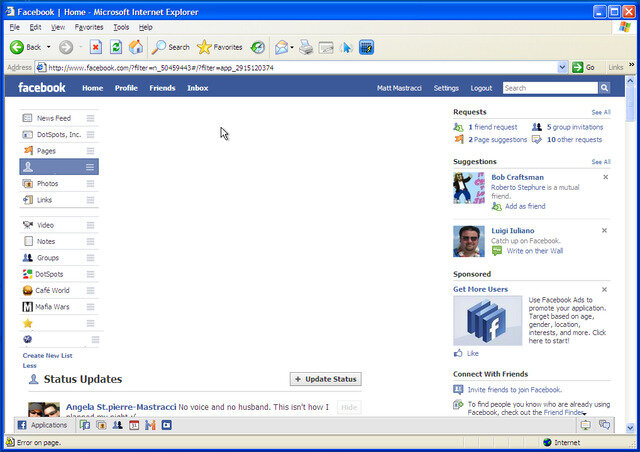 The setting popup menu occasionally gets itself into a state where it pops as you mouseover the popup part of it, becoming entirely useless (it also random gains padding from time to time): 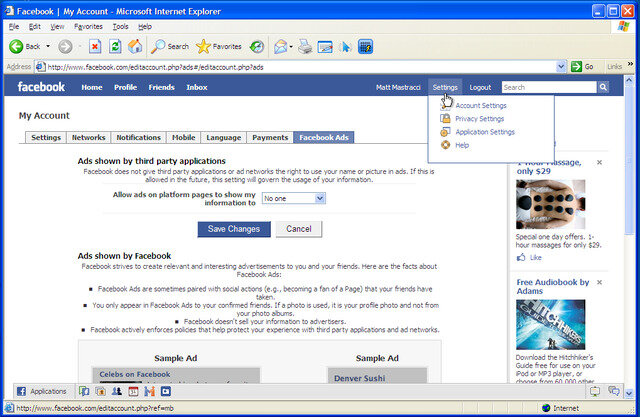 Twitter’s site is pretty simple, but it’s obviously not been tested in IE6. The CSS image sprites they use as controls on each tweet are totally busted: 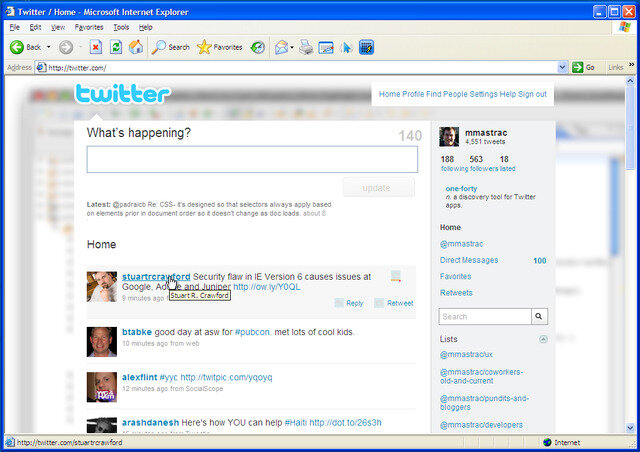 Google reader is a rich application and works reasonably well in IE6. Lots of little formatting issues: buttons that are cut off, icons that float in the wrong place, stuff pushed down a line. Overall, still usable, albeit slow: 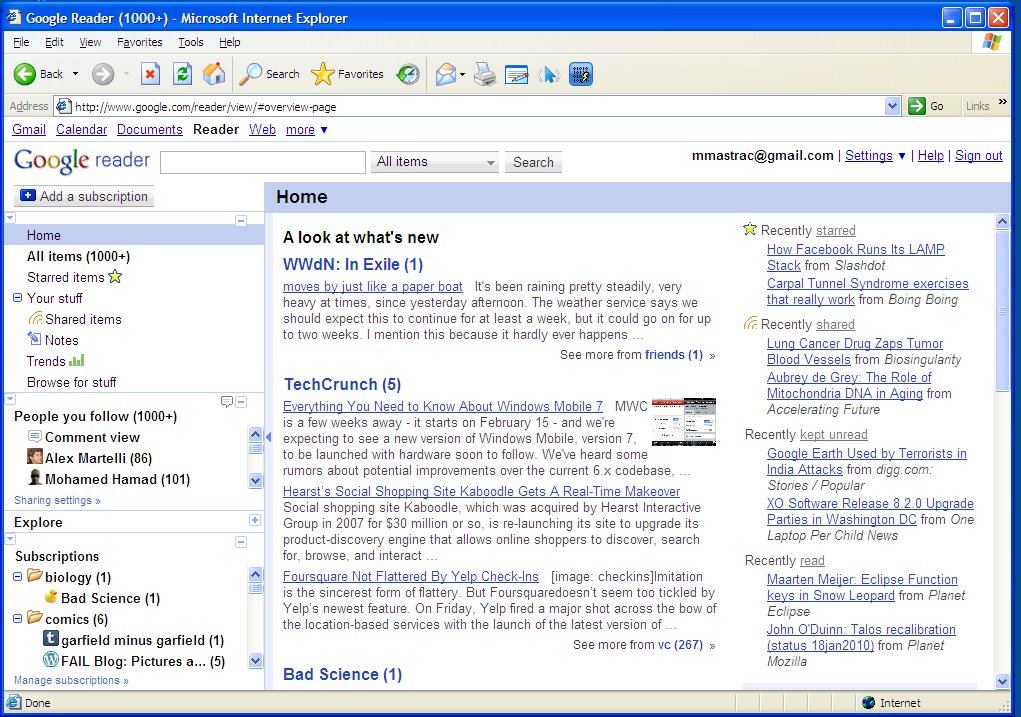 FriendFeed’s audience is probably not using IE6 and I imagine that they don’t put a lot of work into testing it. Many of the sidebar links don’t work and it sends transparent PNGs to IE6, which happily poops all over them: 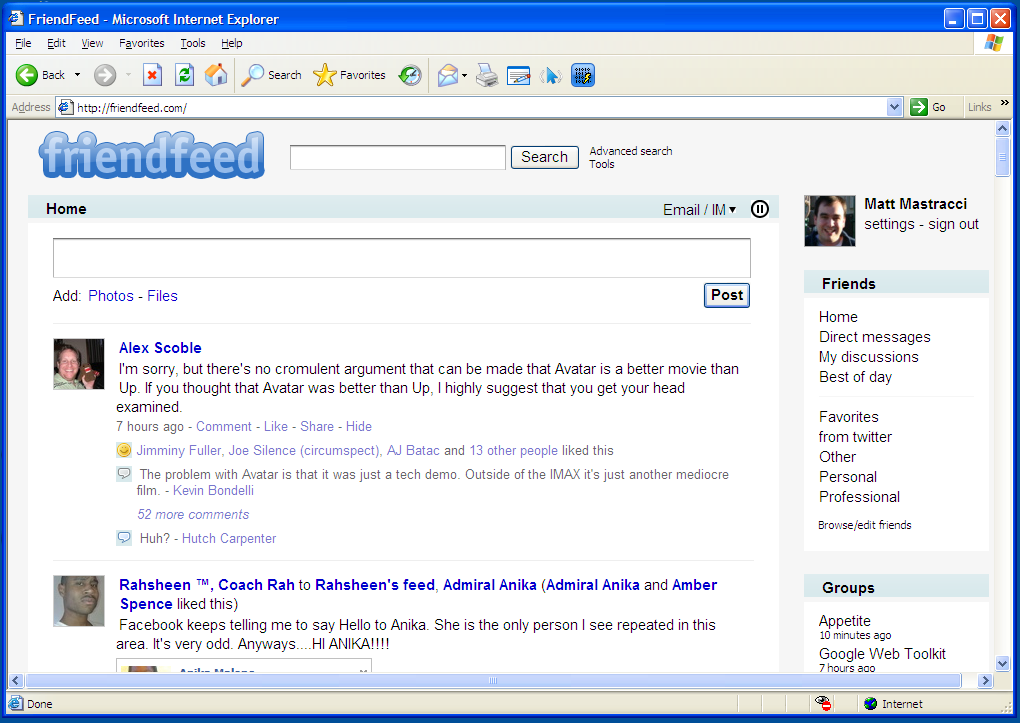 An up-and-coming Twitter client, Brizzly looks pretty stellar in modern browsers. The front page is a bit mangled in IE6, however: 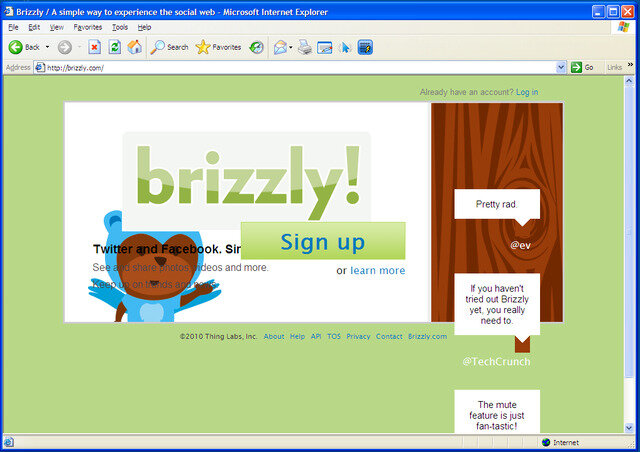 When you try to log in, it’s pretty obvious that IE6 isn’t in their plans: 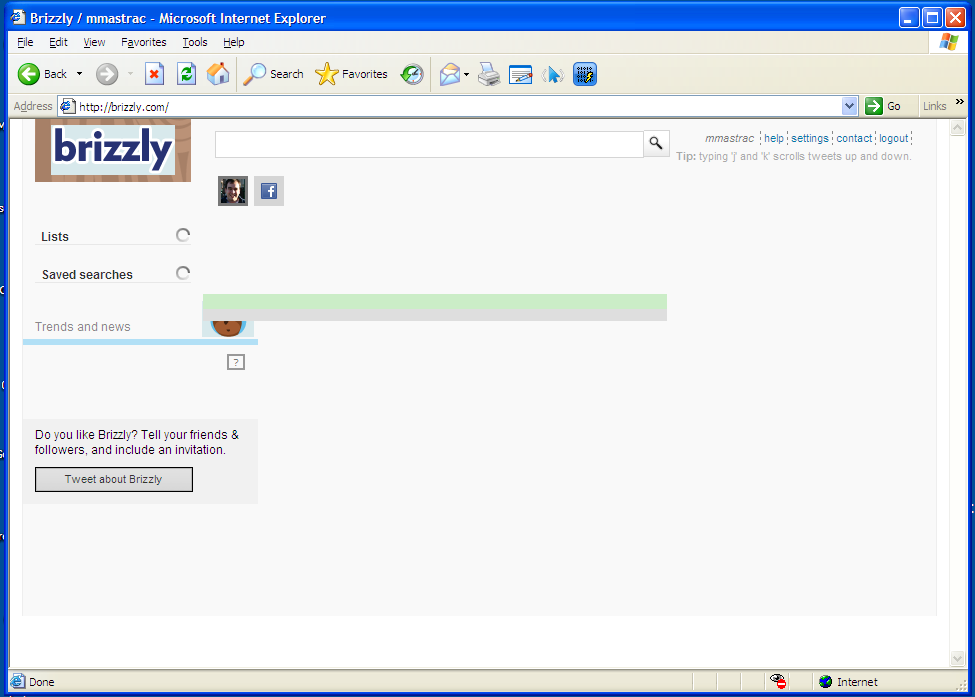 There’s a pretty big part of the web that still works in IE6, but a lot of the popular sites are getting pretty buggy in IE6. If your startup decides that it’s not worth supporting IE6, I wouldn’t blame you. IE6 is rockin’ a 13% market share on StatCounter and it’ll likely drop down to 4-5% by the end of next year.

Is it worth all the trouble to support IE6 for me? It depends. I’m not going to worry about fixing every little visual glitch in IE6. I’ll probably start sending down transparent PNGs to everything, even if the images don’t look great in IE6. If some bit of functionality breaks in IE6, I’ll repair it to the point where it works well enough to get the job done.

Full support for IE6? No thanks.