This is the last part of a three-part series covering the odyssey of getting a new coffeemaker, learning BTLE and how it works, reverse-engineering the Bluetooth interface and Android applications for the coffeemaker, writing a Rust-based CLI interface, and finally, hooking it all up to a GitHub actions bot that lets you brew a coffee just by filing an issue!

In part 2 we got the command-line application working, and now it’s time to connect the dots and build a secure, yet web-accessible interface.

We could choose a standard web host, add some sort of authentication on top of it, build the right web tooling to integrate with the nice command-line application we built, and all the associated security so random people can’t brew coffee. But as you’ve guessed from the title of these posts, we’re going hook this command-line app into a private GitHub repo as our “interface”.

Making use of GitHub issues for automating weird things isn’t new, but I think this is the first time you can make coffee from it!

This is what the user will see just before they brew the coffee: 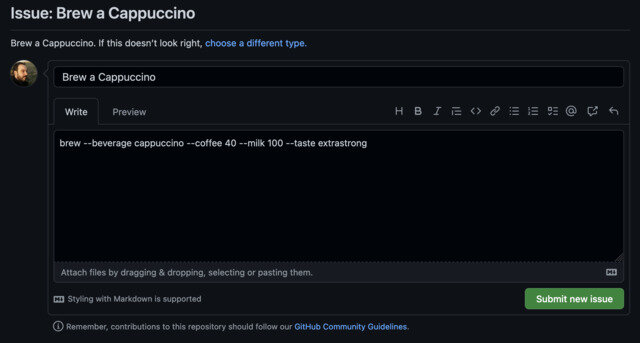 The first question you might have is how we’re going to talk to a Bluetooth coffeemaker from GitHub’s system. This part turns out to be pretty easy: we can use GitHub self-hosted runners as a backdoor into the coffeemaker’s physical location! By running this on a computing device that has a Bluetooth radio in proximity to the coffeemaker, we can send commands to it in response to events occurring in a repo. Conveniently the Raspberry Pi 3 Model B and Pi 4 both support Bluetooth, but in our case we’re going to be using a spare MacBook that’s kicking around.

First thing, we need to create a new runner on GitHub for our project, and then set up the runner on the MacBook:

GitHub actions are pretty flexible and we have a huge number of events that can trigger them. In our case, we want the creation of a new issue to trigger a run, so our trigger becomes:

We’ll pull in the create-or-update-comment action from peter-evans for updating the user about the status of their coffee:

And once the coffee is brewed or the process has failed for some other reason, we’ll want to close that issue, so we’re going to pull in peter-evans/close-issue for this:

The actual brewing part will be pretty easy as well, but it’s going to require use to fetch the text of the issue and use that to create the command-line to run.

jq is one the best tools for integrating JSON APIs with shell scripts, so we’ll make use of that. We’ll create a small test JSON file called test.json that contains just the interesting subset of what’s available in the file at $GITHUB_EVENT_PATH:

First, we can test extraction of the issue body:

That worked, but we’ve got some extra whitespace there. We can trim that with another jq command, gsub. By replacing leading or trailing whitespace (gsub("^\\s+|\\s+$";"")) with nothing, we can get just the text of the comment:

Now what we want to do is allow the user to specify the command-line in the issue, but ensure that they can’t run anything nefarious on the runner. We developed a command-line cappuccino recipe in part 2 that we ran like this:

So let’s extract out everything past the hyphens and make that the required input in our newly-filed issues:

To work on extraction, we’ll update the issue.body field in our test.json file to this partial command-line:

Since we are creating a valid partial command-line for our brewing app, we can make use of that fact that we know the exact structure. In this case, we know we want it to:

We can then build a regular expression that will be limited to just the arguments we’re allowing here. We’ll use the \w character class as it’s a close match to the values required by our parameters.

We could go further in validating the --beverage parameter, or the values for the ingredients, but we know that those are carefully checked in the application and we’ll let the application handle the validation:

Now we can put it all together and extract the command-line like so (note that we have to escape the \w patterns in regular expression):

And that’s probably the only tricky part of the process. Now we can build our GitHub action, piece-by-piece.

First, the preamble that tells GitHub where and when to run the action, and what permissions it has:

We’ll then install the longshot executable from cargo and let them know it was done:

Next, we’ll process the requested brew operation using the jq incantation from earlier. This step will create a body.md that we’ll use to update the comment, as well as cmdline.txt that will be used to execute our brewing operation later on:

And run the brewing command:

And with all those steps, we can get ourselves a coffee from GitHub!

While you can’t access my private repository that I’m using to brew us coffee at home, you can definitely try out the example repo that I’ve set up here which uses the command-line interface’s simulator and runs on GitHub’s action runners instead: