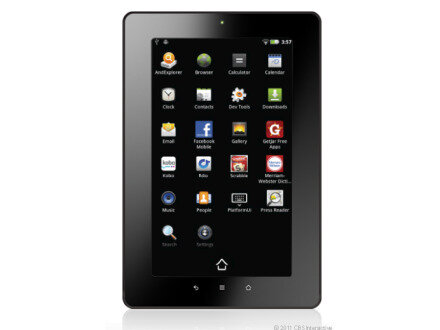 Today I had a chance to play with the Canadian equivalent of the Kindle Fire, the Kobo Vox. It’s an Android 2.3 device, which means that it effectively has access to the entire ecosystem of Android apps. What it lacks, unfortunately, is the official Google Market application. It did appear to have access to the Gmail app, which makes the lack of Google’s Android market surprising.

The Vox is a bit lackluster in the graphics department. Full-screen animations like zooms and fades are choppy: 5-10 frames per second. The same animations in the Kobo application on my Galaxy Tab 10 are fluid and smooth. This makes the Kobo Vox feel like a really cheap bit of hardware. It’s not a big deal while reading books in the Kobo application: paging is lightning fast, although it doesn’t have any sort of animation to indicate page flips.

One thing you get with the Vox that you won’t get with the plain Kobo application on other devices is the “Kobo Voice” social reading experience. You can annotate passages in books and share them with other readers. I don’t find this to be a big loss. The Vox also offers a way to lay out books in two-page landscape mode, which would be amazing on the Galaxy Tab 10, but feels a bit cramped on the smaller Vox screen.

The Kobo Vox does have a nice screen. The Dell Streak 7” tablet has issues with narrow viewing angles in portrait mode. From what I could tell, the Vox was beautiful in portrait and landscape orientation. The quality of the display feels pretty good.

Based on the five minutes I played with it, I don’t think it’s worth me buying. I’m tempted to look at the Kindle Fire for use in Canada, but I suspect that Amazon’s less-than-perfect support for Amazon services in Canada will make it less of an interesting piece of hardware. If you don’t already have a tablet, however, this might not be a bad device to purchase.