UPDATE, Apr 19 2009: This does not fix all compiler crashes in Eclipse.  This is only useful for the compiler crashes where an Eclipse JVM configuration is used.  Please see my later blog post for a better fix and disregard this information.

This is the same error I hit before (see my earlier post), but it happens in Eclipse during the “deploy to AppEngine” phase.  You’ll see it if you’ve got a project configured with a 1.6 JVM on the build path (even if your .class compatibility is set to 1.5).  It’s not obvious how to fix this at first glance - I had to dig around to find the options that Eclipse passes to the JVM.

You can fix it by adding the same compiler workarounds we explored before to your JVM default arguments.  IMPORTANT NOTE: Add the args to all of your 1.6 level installed JVMs.  I’ve found that Eclipse doesn’t always choose the selected one if there’s an equivalent also installed (ie: it may use your ‘1.6’ JVM if you have ‘1.6.0’ selected).

Add them to your JVMs under Preferences > Java > Installed JREs by clicking the edit button and filling out “Default VM Arguments”: 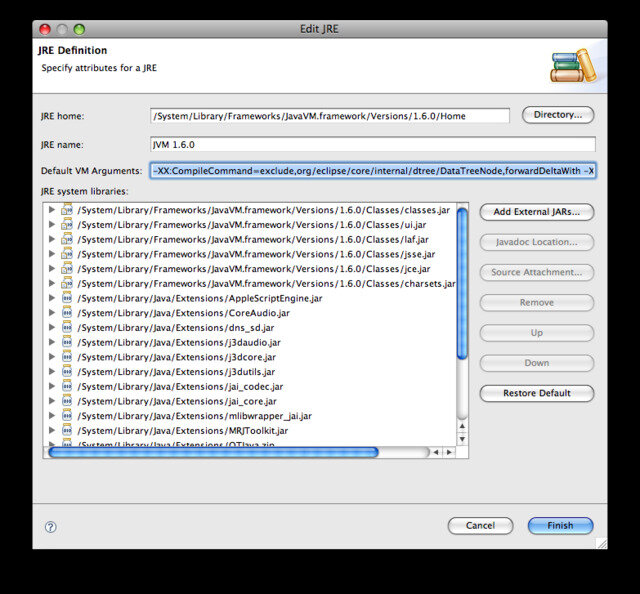 There’s a bug in the latest Java 1.6  that Apple provides that gets tickled by the GWT 1.6 compiler.  It manifests as a reproducible HotSpot compiler crash that looks like this:

When you look into the crash logs that Java produces (found under ~/Library/Logs/CrashReporter/java_*), you can see that HotSpot was compiling a method when it crashed:

The workaround is to disable JIT of some JDT methods using some advanced JVM command-line arguments.  Using Ant, you can tack them on to your GWT compiler task <java> blocks, like so:

By applying those commands, you ask the HotSpot compiler to skip those methods (relying on the interpreter to run them).  You’ll know it’s working if you see this during your compile:

I’m hoping that Apple eventually gets around to releasing an updated Java 1.6 for OSX.  This bug was fixed in mainline Java a very long time ago!

Looks like they aren’t obfuscating class names yet (a feature that just landed on the tip of trunk, IIRC):

The name of the project is “com.google.focus” and there are references to codenames: “evergreen” (contact info DB?) and “publicusername”.  They are also pulling some of the code from Google Collections into the final output.

We’ve been trying out Google’s Eclipse plugin for the last week and it’s made a huge difference to our GWT development experience.  The plugin is designed to enhance your Java AppEngine and GWT workflow.  We’re mainly using it for GWT development, so the biggest wins for us are the GWT features, including:

There’s some cool support for AppEngine in the plugin as well.  You can publish a hybrid GWT/AppEngine project to Google’s servers with a couple of clicks.  This makes the development/deploy cycle trivial, allowing you to quickly iterate using the same environment as your production applications.  With this new toolset, AppEngine is an easier platform to deploy to than servers you own and operate yourself, IMHO.

Aside: one interesting feature that slipped under the radar for this AppEngine release is support for cron-style jobs.  While this was possible using a cron job on a managed server hitting a URL on your application instance, implementing it in the platform itself makes life easier for web developers.  Note that this isn’t true cron, but rather a “hit this URL on this schedule” feature.  I actually prefer having cron jobs exposed as web endpoints - it saves you from having to duplicate your web framework’s infrastructure setup in a command-line application.

All-in-all, a very cool release.  Thanks to the GWT and AppEngine teams for making this a reality.

I’m having trouble getting Feedburner to update from my server, so feeds aren’t showing up in Google Reader.  It’s not pulling down the latest posts, just the ones from yesterday and before.  Any ideas?

UPDATE: It would help if I didn’t redirect FeedBurner to its own feed.