Picasa2 seems to run great under Wine.  The one issue so far is the corrupted fonts for the album headers:

Upgrading to the latest Wine CVS seems to fix that problem - here’s some cool shots from the program under Wine: 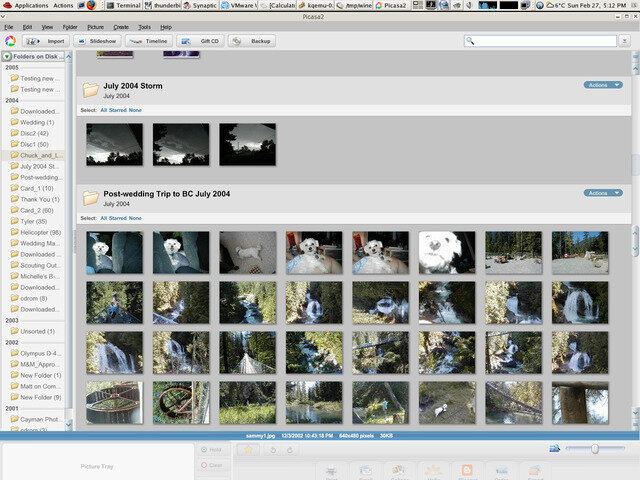 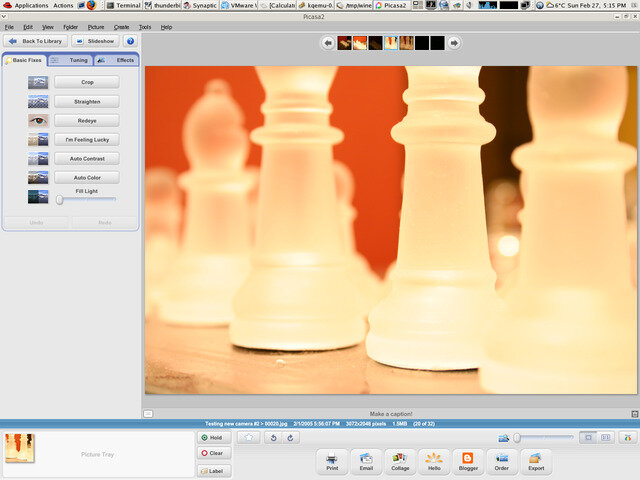 Some of the features don’t work, like printing or mailing photos.  I’m not sure how much of the MAPI stuff Wine has re-implemented, but that’s likely why it’s not working. 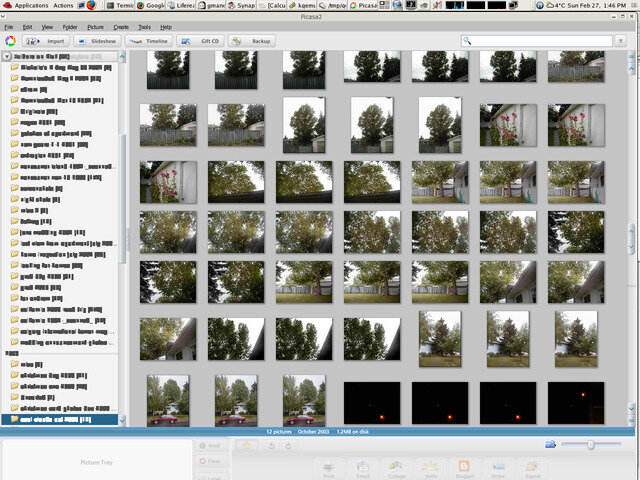 Buried within the 2005 Canadian government budget is a comprehensive section on “green plans”.  One of the interesting hilights is the promise of a “feebate” for energy-efficient cars (and a possible levy on more polluting vehicles).  There isn’t a lot of detail about this plan, but it’s certainly a welcome change:

Of particular interest to the Government are measures that may encourage Canadians to acquire more environmentally friendly vehicles. As discussed below, the Government is negotiating with the auto manufacturing sector to achieve an agreement that would improve the fuel efficiency of vehicles sold in Canada. The Government believes that there may also be merit in the concept of a vehicle “feebate.” A feebate would provide a consumer rebate for fuel-efficient vehicles and impose a fee on fuel-inefficient vehicles. The program could be designed to be revenue neutral for the Government. Over time, a feebate could contribute to the improvement of the fuel efficiency of vehicles purchased in Canada, reduced greenhouse gas emissions and improved air quality.

Consideration of a vehicle feebate may also generate useful lessons on the potential to apply the concept of a feebate for encouraging homeowners to acquire, and manufacturers to supply, more energy efficient home appliances.

It’s certainly not concrete or fleshed out in any real way, but it lays down the foundation for a more responsible environmental policy, as well as providing tools for the regular citizen to make an individual difference.

Fabrice Bellard has recently added kernel monitor support to QEMU (The QEMU Accelerator Module, or kqemu), allowing it to execute simple instructions natively on the CPU - much like other virtualization tools like VMware do.

The speed improvement is dramatic and places QEMU near the the top with other virtualization technologies, though it lacks the high-quality GUI and administration tools of the other enterprise products.  Best of all, it’s completely free!

I decided that I wanted to try upgrading my Shaw@home service from the “high speed” service to their new “Xtreme” package.  The new Xtreme package uses a new DOCSIS 2.0 Motorola modem that can handle better raw throughput.  I was hoping that the upgraded service would allow me to use more bandwidth without affecting my phone service quality, since we’re using Primus’ TalkBroadband service and it can be very bandwidth-sensitive.

Immediately after installing the new cable modem, I happened to get a call from my parents.  They could barely hear anything on their end of the call and ended up having to call me on my cell.  After some network diagnosis and many tech support calls to both Shaw and Primus, it turned out to be that the packet latency with the Xtreme service is much more variable than the high-speed classic Cybersurfr modem service.  When I had first installed the modem, my ping latencies to my default gateway were hitting times up to 600ms.

Thankfully, Shaw gave me my old cablemodem back without a hassle.  After reinstalling it, my VoIP quality is back to normal and I can make decent phone calls again.

Just a warning to anyone with Primus service considering an upgrade to Xtreme!

This one almost speaks for itself:

Poll: Nation split on Bush as uniter or divider

Forty-nine percent of 1,007 adult Americans said in phone interviews they believe Bush is a “uniter,” according to the CNN/USA Today/Gallup poll released Wednesday. Another 49 percent called him a “divider,” and 2 percent had no opinion.