All my readers, please note that this is constructive criticism (as well as a fix!) for the new theme, not an emotional rant or complaint.  Ben Goodger has done an awesome job in getting Firefox ready for 0.9.

The first time I fired up Firefox 0.9, I wasn’t too happy with the new, default Firefox theme.  However, It turns out that it mostly the awkward spacing that was making the icons look out-of-place.  As strange as it seems, reducing the spacing makes the entire theme look a lot better.

I managed to reduce the spacing on the toolbar buttons by hacking the skin chrome.  You’ll need to place this in a file named “userChrome.css” under your Mozilla\Firefox\Profiles\profile\chrome directory.

Here’s the shot from before (with awkward spacing):

And after tightening up the spacing a bit:

Looks much better to me - not a huge change, but enough to make me feel more comfortable with it.

The underdog team has made it to game 7 of the finals.  “Flames fever” has pretty much devoured the city.

We’re in for a game tonite.

Having been using CVS for the last four years in a commercial environment, I’m certainly pretty comfortable with it.  Branching and merging is tricky (sometimes painful) as usual, but losing file history on rename is a killer.  WinCVS has been the gravy on top that keeps us using CVS.  Anyone who might have had the misfortune of trying to work with command-line rcs or cvs knows how much more productive a GUI makes things.

I’ve been evaluating alternatives in the next generation of free SCC applications.  Given the above issues I’ve had with CVS, my requirements are:

My “nice-to-haves” would be:

I’m crossing my fingers waiting for Subversion to support the multiple-merge support.  It feels like the project with the most elegant and future-proof design.  It certainly is a pain to get up and running on some older RedHat distributions (db4 and Apache 2.0 requirements).

The trailer for Fahrenheit 9/11 is out.  Looks like it’ll be a great movie - hopefully as interesting as Bowling for Columbine was.

Myself and a number of co-workers entered the IntensIT competition here in Calgary.  The competition is designed for IT workers, the goal being to write as much of a complete system as possible within eight hours.

We ended up taking 1st-place overall thanks entirely to the excellent meshing of our team.  I suppose this proves that methodology doesn’t matter whatsoever, but people do…  at least when you’re creating an entire system in eight hours, that is.

Oh yeah- using NUnit, NAnt, Draco.NET and CVS really do make your life easier when you’re under the gun.

You can see the other winners here. 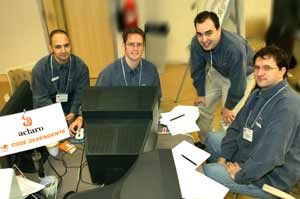