I’ve been working on a small project to bring support for the HTML5 <video> tag to older browsers, hoping to encourage use of this tag.  The idea is to use Flash’s video/mp4 support as a “downlevel” emulator for the video tag.

It uses an HTC binding in IE and an XBL binding in Mozilla to create a flash video in place of the video tag itself. The flash video support is provided by the excellent FlowPlayer, which supports playing mp4 videos out-of-the-box.

Right now, video4all only supports videos that are statically added to your page. I hope to add support for dynamic addition of videos soon. The videos must be encoded in both video/mp4 and video/ogg formats to properly support Firefox, Safari and the Flash fallbacks. You’ll need to ensure that your video sources are properly tagged with the correct MIME types so that the script can pick them up.

The currently released browsers (that I know of) that support <video> are:

This project extends support for <video> to:

Quick round-up/review of the books I’ve read this first half of the year.

Interesting thoughts on colonization of Mars, longevity treatments and the eventual conflicts between the ancestral and new homes of humanity. I recommend reading them all back-to-back as the characters and story pick up in the next books right where they left off. The books can occasionally get a little dry, but it’s a good, inspiring read if you enjoy stories about politics and terraforming. Overall, more of a story for hardcore sci-fi lovers - not something you’ll want to dabble in. If you’re less of a committed sci-fi fan but interested in a good colonization story, The Moon Is a Harsh Mistress

An approximate sequel to Pattern Recognition

, at least from the involvement of Hubertus Bigend and his Blue Ant company. Interesting characters and plotlines: he weaves together three major characters, all are very believable and well-developed. Mostly follows the story of a former-rock-star, Hollis Henry, writing for Bigend’s virtual Wired-clone magazine, Node, an anti-anxiety-addict named Milgram and Tito, a cuban teenager. Light book overall, enjoyed it.

I got this one in PDF format as part of my 2009 Hugo Awards Voter’s packet. I haven’t read anything else in the series, but this was entertaining. It’s an alternate point of view (Ender’s shadow style) to another one of John Scalzi’s books, The Last Colony

. The book is written from the point of view of a colonist couple’s daughter, Zoe. Since I hadn’t read the first book that this book complimented, I felt like the book was too light - too much was missing. At some point I hope to pick up the other book and see if the having the pair makes more sense together.

Out the the books in this entry, this was by far my favorite. Deep and engrossing, along the lines of Hyperion

. Follows a post-plague human culture set in the far-future, with lots of high-technology and a galaxy full of dead alien races. Begins with an archeological dig of an alien race wiped out in a solar event 990,000 years prior. Lots of hints of a bigger universe, though much of the details seem to be left for sequels. Falls apart a little near the end, but I’m excited to read the next books in the series.

I spent the last few days shoehorning Windows 7 into one of the laptops I’ve got around the house. My day-to-day desktop for development is a MacBook Pro, but I spend some time testing on Windows. I haven’t had a chance to update my Windows knowledge from where I left it at the XP level, so I figured it would be a good time to give Vista’s successor a shot.

The laptop I’m upgrading is old, but not so old that it’s obsolete. It’s a Gateway MX7337 with a 3.0GHz P4 (back when Hyperthreading, rather than multi-core was the rage!). It’s got a reasonable 1GB of RAM, enough that a basic Linux desktop would fly and development isn’t impossible. In fact, I did all of the Windows development for Stumbleupon’s IE toolbar on this machine!

My experience begins a few days ago, shortly after we signed up for BizSpark. I downloaded their Windows 7 RC ISO and burnt it to a DVD. Popping it into the laptop resulted in the most pleasant Windows install I’ve encountered.

I’ll digress for a short moment here. I’ve been installing operating systems for a while now and Windows has always had the worst experience. I was very surprised when Microsoft decided to launch XP with the old Windows-NT text-mode installer. For the last few years I’ve been installing Fedora boxes with the pretty VESA-based Anaconda, while every XP machine I boot up starts off with the classic blue-screen of installation and “Press F6 to load drivers”.

There’s not much to say about Windows 7’s installation. It was fast, pretty and over with before I could really think about it.

My biggest concern before I started down the Windows 7 path was hardware support. The Gateway laptop was a pain to get working under Windows XP. It uses bog-standard Broadcom wireless drivers which, for some strange reason, Microsoft never supported off its XP install disks. This always left me with an XP machine unable to connect to the internet, having to use either a burnt DVD or a USB key to port over Gateway’s poorly packaged driver bundles.

Windows 7 surprised me here. With the exception of the sound hardware, everything worked out of the box. This is a pretty big improvement over XP on this particular laptop, though I can’t vouch for the experience of a user with newer, potentially unsupported out-of-the-box hardware. The graphics were a bit disappointing, since Intel’s “extreme” laptop chipset (852GME) was only supported by Windows’s default VESA modes.

The sound hardware was a mystery. The drivers were installed, device manager said everything was OK, but nothing was coming out of the laptop’s speakers. I eventually found some forum posts that suggested I try a set of Vista drivers – from a different manufacturer. That did the trick!

My next task was attempting to get graphics working at a level beyond basic VESA support. This was a lot trickier, since Intel’s last driver update was in 2006 and the fact that there was never an official driver release. I ended up using the device manager’s ability to install legacy drivers and pointing it at the latest driver release from Intel. A forum post suggested the following convoluted, but successful workaround:

It took me a few times to get that working, and I ended up with two 82852/82855 display adapters in the device manager. While the drivers are somewhat faster for general use, they are still too old to support Aero. I can’t believe that worked!

The final part of the adventure dealt with trying to set up my Bonjour-available printers. I had installed iTunes on the laptop previously, which usually installs the Bonjour software and the Bonjour Printer Wizard. In this case, however, the printer wizard was missing. I had to uninstall and reinstall the software to make this available.

Once the wizard was ready to go, it found the two printers on the network. When I selected the printers I was confused - it couldn’t find the appropriate drivers for either of them. It turns out that Windows 7 doesn’t ship with the whole gamut of printer support on the installation disk like XP did. Instead, you need to either download the drivers directly from catalog.update.microsoft.com (thanks to @herkyjerky for the tip), or use the workaround that I did: setting up a fake printer on LPT1 with the correct drivers (which are pulled from Windows Update automatically), then deleting the printer and letting the Bonjour wizard add it.

Overall, I’m happy with the Windows 7 experience on this older machine. It certainly boots faster (fresh install notwithstanding) and it feels less clunky than XP on the same machine did.

The whole configuration experience is pretty overwhelming. Most of the options have moved since XP. Thankfully, the search available in the start menu is able to find most of the settings that I couldn’t find myself: showing file extensions and hidden files, for example.

UAC is a new beast for me. It’s somewhat annoying, but as long as you are a member of the local Administrators group you can just keep clicking “Yes” to its prompts. If you aren’t part of the admin group, you’ll need to enter the username and password of the admin every time you want to perform an admin-level task. If Microsoft had provided a way to remember the admin credentials for a short period of time, I’d probably run as a regular user rather than an Administrator (thanks for @liltude for some UAC tips!). Quick tip: if you get frustrated with entering your admin credentials for all the prompts and add yourself to the Administrators group, don’t forget to log out. If you don’t, you’ll still have your old “standard user” token and UAC will keep prompting you for a username/password!

Check out the double rainbow from today’s weather. Fantastic! 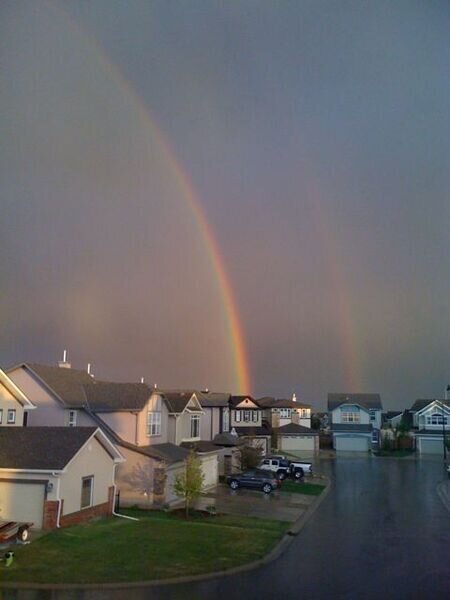 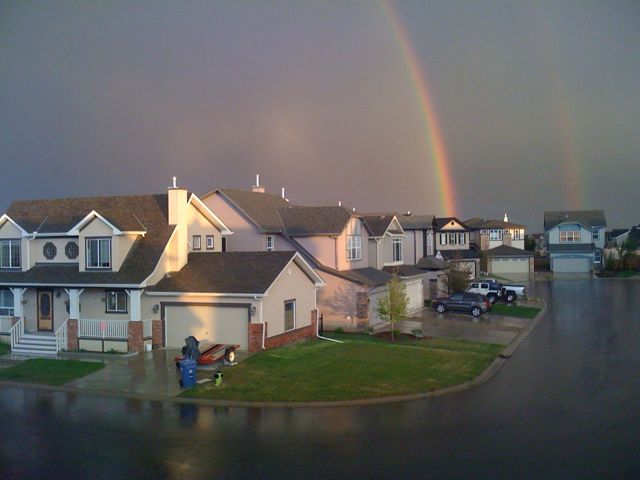 I’ve been following the story of Pixel Qi for some time.  I bought an OLPC during the first G1G1 event and I’ve been impressed with the screen’s visibility and low-cost construction.  On top of that, it can turn into a black-and-white, e-ink-like screen with minimal power draw using the same individual pixels it uses for color display, but at 3x the resolution.

Check out the comparison between the Kindle’s e-ink screen, a regular laptop and the new 3Qi screen below. I’ve always been somewhat irritated by the inverted flash of most ebook readers - probably the reason I’ve been avoiding buying them for the last few years. An interesting factoid from the video: some touchscreen technologies can absorb 50% of your screen’s brightness!

UPDATE: I just found an interesting video on OLPC News, saying that “… the new Pixel [Qi] screen has actually evolved past the OLPC screen, to the point where it is not longer even using the XO laptop display technology.”